I had the privilege to visit St John’s Lutheran Church, which is part of the oldest Protestant Christian tradition, dating back to Martin Luther and the Protestant Reformation in 1517, more than 500 years ago.[1] The St. John’s congregation was formed in 1888. It was the first English-language Lutheran congregation in Knoxville. The founding members were Lutherans of German heritage who preferred English over German, which was then used in other local Lutheran churches.

Initially, they St John’s Lutheran Church members met for worship in the First German Evangelical Lutheran Church in downtown Knoxville. In 1889, the group leased the former the Broad Street Methodist Episcopal Church building, on the corner of Broadway and Fifth Avenue, for worship use. In 1890, the congregation incorporated, affiliated with the United Synod of the Evangelical Lutheran Church in the South, and purchased the former Broad Street Methodist property. The congregation, too, has a long and enduring history. Organized in 1888 as the first English speaking Lutheran congregation in Knoxville with 29 members. [2]

In 1911, members broke ground for our current church building thanks to a generous gift of land and $90,000 given by charter member Martha Henson. Dedicated on May 25th, 1913, the Gothic revival style building has been a cornerstone of the Emory Place neighborhood for more than 100 years. [1]

Looking back on the history of what is now Emory Place was mostly farmland during the first half of the nineteenth century. In the 1850s, two events took place that led to the development of the Emory Place area. The first was the establishment of Old Gray Cemetery in 1850, which served as a de facto public park, and drew pedestrians to the area. The second event was the construction of the railroad, which reached Knoxville in 1855, pushing the city’s northern limits to what is now the Southern Railway tracks. The Emory Place area was annexed in 1855. [3]

On July 20, 1863, at the height of the Civil War, Union General William P. Sanders placed artillery along what is now the section of Fifth Avenue between Broadway and Central, and proceeded to shell Knoxville, which was then held by Confederate forces. Return fire scattered the Union artillery, however, and Sanders was forced to retreat. During the Siege of Knoxville in late 1863, Confederate lines stretched across roughly the same area. [3]

After the war, Knoxville continued to expand northward. By 1867, the Knoxville Foundry had been established near what is now the intersection of Broadway and Depot. Farmers from the rural areas north of the city began selling produce out of wagons along what is now Emory Place to Knoxvillians visiting Old Gray Cemetery, and by the late 1880s, Emory Place had become known as “Central Market.[3]

Emory Place” is named for Reverend Isaac Emory (1830–1904), a New York-born minister who moved to a farm north of Knoxville just after the Civil War, and spent several decades establishing  Sunday Schools across the state. In 1904, Emory was killed in the New Market train wreck, and a park adjacent to the Central Market house was renamed “Emory Park” in his honor. The park remained Knoxville’s only urban park until it was removed in the 1950s and replaced with parking lots. [3]

As I spent time outside this old church, I wondered how delightful it would be to physically see inside this historical church that is on the National Register of Historical Places.  During this time of the COVID restrictions this church remains closed during the week days. All worship services at St. John’s are live streamed on our YouTube channel.

During my visit I walked around taking pictures of the wonderful church built in 1913 made of solid stone. The church is located in the middle of urban part of the city. The front of the building has a Gothic Revival architecture with concrete steps leading up to toe main entries with wooden arched doors. The church has a large cathedral arched windows in the front of the church. The windows allow heavenly light to flow into the sanctuary. The most impressive feature of the building is the church tower, which has 4 stone spares rising up into the blue sky.

Gothic elements in the building include arches at windows and doorways, exterior buttresses, and tracery. The church’s interior utilizes quarter sawn oak. Hammerbeam trusses vault the sanctuary, rising to almost 40 feet (12 m).] The sanctuary is surrounded by 61 stained glass windows, including a series of nine pictorial windows that depict scenes from the Bible in chronological sequence. The windows were designed by Von Gerichten Art Glass of Cincinnati and assembled onsite during building construction.[2]

If you would like to see the inside of this beautiful church, listen to the pipe organ serenade the worship music you can view it during a You Tube service. It is worth it just to hear the powerful organ resonating its sounds through the church. https://www.youtube.com/channel/UChmldyjVP-HSQw5OYcGoraA 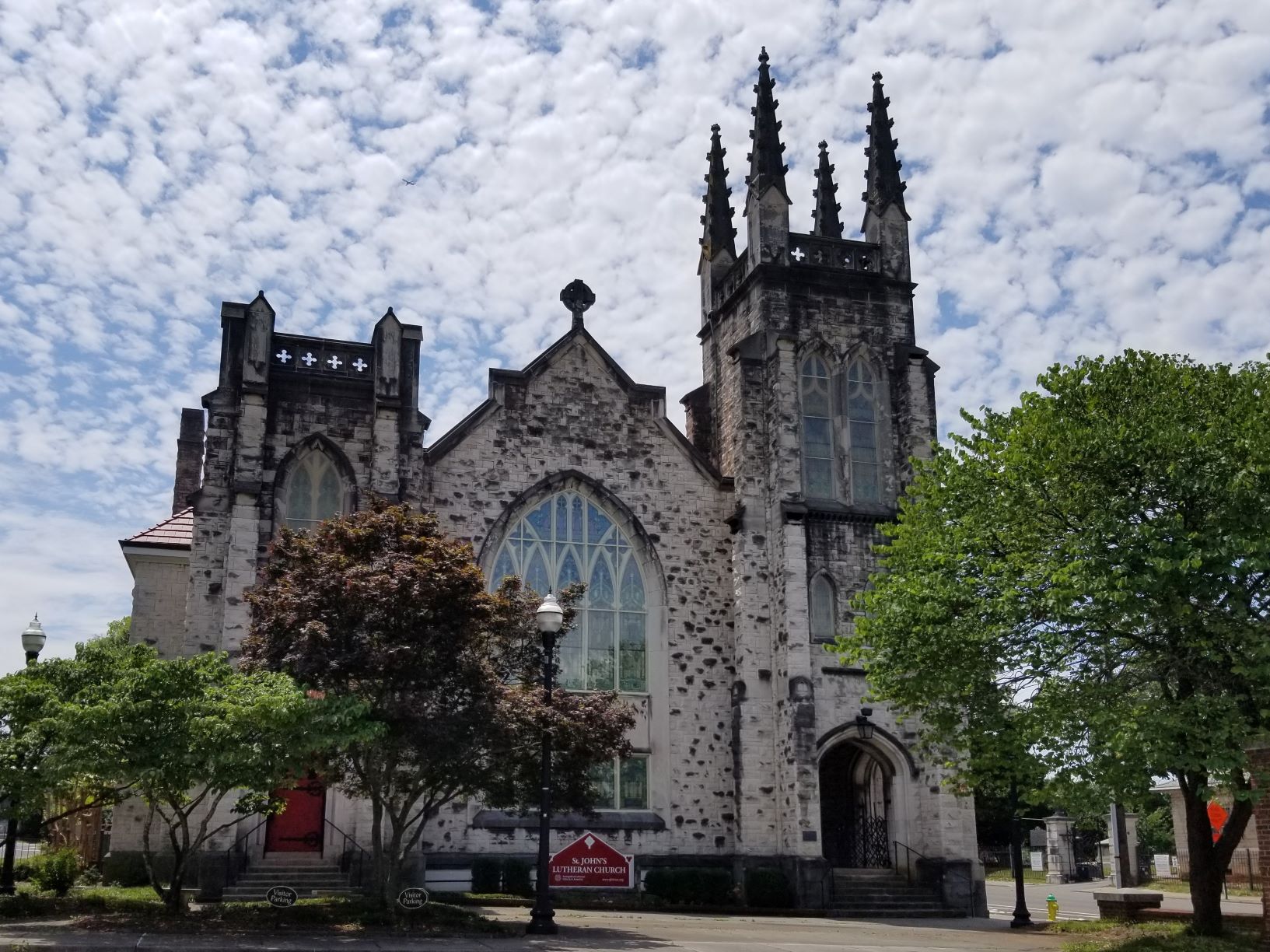 I thought about this statement in one of Billy Graham’s books that I am currently reading. “If ever there was a time when people needed the special power and blessings of heaven in their lives, that time is now. We live in troubled times. Political, social, and economic issues loom so large in our daily lives, we often seem to be in danger of losing any sense of happiness or peace. And many people have lost touch with basic values and beliefs. For many people, life is so difficult and serious that they simply don’t pause to discover the inner strength that comes through.” Our Lord and Savior

With the National emergency for the COVID-19 virus many churches are remaining closed during the week only providing limited capacity openings on Sundays.  At the time of my visit the church was closed, so I spent time outside the church in meditation and prayer.

“All the nations will call you blessed, for you shall be a delightful land, “says the LORD of hosts.” – (Malachi 3:12)

PICTURE GALLERY: Inside Pictures provided by the church website.