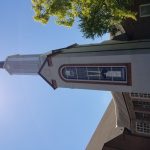 I had the privilege to visit Calvary Baptist Church in Knoxville Tennessee. The church was established in 1911. The church has provided over 100 years of ministry.  Looking back at the early days in 1908 Theodore Roosevelt was in the White House, the Wright Brothers had just successfully flown their first heavier-than-air machine, and the University of Tennessee campus was little more than a handful of buildings atop what is today known as “The Hill.” Only a few years earlier Cumberland Avenue and Kingston Pike had been dirt roads, just recently paved to the country line. [1]

Twenty years earlier, in 1888, what is now Fort Sanders and the University of Tennessee campus had been separately incorporated as the City of West Knoxville, before being annexed by Knoxville in 1897. The area of old West Knoxville south of Cumberland to the river and east of “The Hill,” extending west to the railroad overpass, was still largely undeveloped farm land. By 1908, however, a few roads had been cut into the cow pastures and cornfields and a handful of homes had been built. In optimistic anticipation of future growth, an elementary school had recently opened. [1]

The Rose Avenue School, later renamed Staub School, was located on what is today Andy Holt Avenue. A handful of visionary leaders met at the Rose Avenue School to discuss the need for a church to serve the budding new neighborhood. Soon a non-denominational “church plant,” to use a modern-day term, began meeting weekly in the school building. Believing strongly in separation of church and state, some took issue with the church meeting in a school that received government funding.  So, the young church rented a house on Cornell Avenue, located about where the Phi Sigma Kappa house is today. [1]

The First Baptist Church, then located on Gay Street in downtown Knoxville, began to view the growing young neighborhood to the west as a fertile mission field in need of a Baptist church. Meanwhile, the young church was considering whether to affiliate with a denomination.  Since most of those attending the little church were Baptist, it seemed right to accept First Baptist’s offer of short-term financial support. Several First Baptist members also transferred their membership letters to become charter members of Calvary. The church was officially re-organized as a Southern Baptist Church and became Calvary Baptist Church on January 1, 1911. This influx of money and new members soon enabled Calvary to call its first full-time pastor, Rev. Cates. Soon the church was able to leave the rented house and build its first small building a few doors away on 11th Street, later renamed 19th street. [1]

West Knoxville, as it was still known then, evolved over the years into an interesting and diverse neighborhood. Large homes on Temple Avenue, Circle Park, Lake and Terrace Avenues were owned by prominent Knoxvillans.   On parallel streets south toward the river were more modest homes of professors and working people. The L&N train yard was at the southwest corner of the neighborhood, so the neighborhood and the church attracted many families whose husbands and fathers worked for the railroad. [1]

By 1920, the small building was budging at the seams, so Calvary bought a lot a few streets over with the intention of building a larger building. A building fund was established with the first gift of 50 cents from the pastor’s son, who had sold his chicken. Other members were equally ingenious in raising money.  One group of 18 members put on a play called “The Old Fashioned Mother.” They performed 50 times and netted over $1,000 to purchase new pews for the building quite a large sum in those days! Calvary’s members also had pastry and rummage sales and “measuring socials” for which the admission price was based on height. And when ground was broken for the new building, Calvary’s members were there with shovels and hammers to do much of the labor themselves. [1]

In 1921, 130 members moved into a new brick building at the corner of 18th Street and Yale Avenue, the former site of the “campus rock” before it was moved to the adjacent corner across what is now Volunteer Boulevard. Calvary’s building was located where the University of Tennessee Student Health Center building is today. It had a sanctuary with a small balcony, classrooms on either side and, for the first time, a bathroom in the church. [1]

As the neighborhood grew, Calvary continued to grow to an enrollment of 310 in 1941. Again, more space was needed, and a classroom addition to the rear of the sanctuary was completed in July 1942. In the 1950s, Calvary was still a neighborhood church, but it had developed also a strong mission outreach to the University of Tennessee campus on its doorstep. [1]

Calvary’s growth came to an abrupt and dramatic halt in the early 1960s when the entire neighborhood was thrust into turmoil. The University of Tennessee announced a westward campus expansion, having been given authority from the state to acquire by eminent domain every home and building south of Melrose Avenue. Residents had no choice but to sell and leave. Calvary’s very future was threatened. The neighborhood church was losing its neighborhood! In a period of just over a year, UT purchased 131 acres of homes, two neighborhood grocery stores, a school, and Calvary’s then only 13-year-old sanctuary. Seemingly overnight the neighborhood vanished, every building leveled![1]

Most of Calvary’s membership was scattered to the four winds. In looking for a place to relocate, Calvary had one main requirement to remain as close as possible to the University of Tennessee campus in order to continue its ministry to UT students. Some counseled Calvary to move to the growing suburbs in Bearden and further west Knox County. But Calvary was committed to its campus ministry and determined to stay close.  [1]

So, the property where Calvary is currently located was purchased, and a remnant of Calvary families moved to a much smaller new building at 3200 Kingston Pike. There, Calvary began to grow again. New families and students from the expanding UT campus joined. Calvary became more a metropolitan than a neighborhood church. [1]

Members started contributing to a special “birthday offering” on their birthdays and purchased an adjoining lot for future expansion.  This time the building fund was supplemented with a bank loan, and construction began on more educational space and a new sanctuary to seat 750 people, which was quite large for the time. The new sanctuary and educational space were dedicated in 1951. [1]

By the mid-70s, Calvary again had space problems. Two morning worship services were each filled to capacity.  Once again Calvary’s members were called upon to give sacrificially. Rather than securing a loan, Calvary was led to build by faith on a cash basis as God supplied with no outside loan financing, much as members did back in 1921.

In 1980, a program called “Together We Build” was kicked off with a banquet and an around-the-clock prayer chapel. The highest target goal was the “Hallelujah” goal of $350,000, so called because all of Calvary’s professional fundraising consultants said it was the most we could hope to raise. But over the course of the building project almost $3 Million was given. People sacrificially sold jewelry, boats, and cars. God miraculously provided as money was given typically in relatively small amounts and usually just as funds were needed to keep construction from grinding to a halt. In October, 1983, Calvary’s present church sanctuary addition was dedicated debt free. [1]

Even with the new building housing a 1200-seat sanctuary and fellowship hall, educational space was often at a premium.  Fortunately, during that time Calvary was given rent-free access to nearby Dulin and Taylor Houses, once owned by the Dulin Gallery of Art. Dulin House was used for single adults and Taylor House for youth. The houses were located beside the next-door Daughters of the Confederacy building. For the singles class it was a relatively long trek from Dulin to the sanctuary, much like Calvary college students’ walk from the current student center today! Dulin and Taylor Houses were a real blessing at the time because they came with desperately-needed parking spaces. Because of the lack of on-site parking, every Sunday morning six busses made continuous runs transporting people from remote parking lots at Western Plaza and the UT Agricultural Campus. [1]

To create new parking Calvary was able to purchase three houses and a vacant lot on the opposite side of Kingston Pike. And in the summer of 1988, we began grading new parking lots behind those houses and burrowing a tunnel under Kingston Pike to connect the south and north campuses. The tunnel was completed in 1991, leading to 200 new parking spaces, a truly creative solution to our parking issues! [1]

New educational space was also added to the south campus in what previously was unused courtyard space. A few years later Calvary further expanded the north campus by purchasing the current Student Center and Fellowship House buildings from the Unitarian Church, which re-located elsewhere on Kingston Pike. Today, God has blessed Calvary with six buildings and seventeen acres located along both sides of Kingston Pike. [1]

Calvary’s history is so much more than buildings and tunnels and other material milestones. Calvary’s real and enduring history is about people and worship and service to God. So much has been left out of this abbreviated history, so many names of pastors and deacons and teachers and members who have served faithfully over the years. So many ministry outreaches to neighborhood, city, country and world! So many people who have come to a saving knowledge of the Lord Jesus Christ! [1]

During my visit on June 12th I had the privilege of meeting Melissa Fesler, Ministry Assistant. She told me about Vacation Bible School planned for 5 days starting June 15, 2020 and ask me to pray for the scheduled VBS as this year it was going to be hosted virtual.

The message on the website: Summer 2020 may look different than we originally planned, but we’re still excited to partner with you to host the VERY BEST Summer! FOCUS VBS & Virtual Experience will help kids dive deeper into their faith by putting the FOCUS on God and His amazing plan for us. https://knoxcalvary.com/focus-vbs

As I walked around the large brick building, I observed an amazing view of the Tennessee river winding its way through the lush valley lined by foothills of green trees.  I couldn’t help but think of the number of people that have enjoyed this view over the years. God has blessed us with beautiful country as an open canvas for our churches to shine brightly.

It was wonderful reading about the fortitude of the members of the church to find a new church location when the University of Tennessee expanded buying the land at the old church location. They cherished the connection they had established with the university college students via the student ministry. They found a new location close to the university allowing them to continue to minister to the students. That was a true blessing, because, college students are the future of our Nation. A campus ministry can help students connect with other like minded believers, helping them to spiritually grow and bear fruit. I am thankful for the many season God provided Calvary Baptist Church as the members trusted Him to provide for their needs. Over the many years the church has continued to grow and bless many people.

During my visit on June 12th I had the privilege of meeting some Melissa Fesler, Ministry Assistant.

“Preach the word, be prepared in season and out of season; correct, rebuke and encourage with great patience and careful instruction.” – (Timothy 4:2)