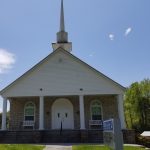 I had the privilege to visit Millers Cove Missionary Baptist Church, which is one of the oldest churches in East Tennessee in a town called Walland.  Walland is a community in Blount County nestled in the foothills of the Smokies. The church was the first Missionary Baptist church organized in 1810 and they began their records then and have kept them down to the present time. The first meeting place was a log building used jointly by Methodists, Primitive Baptists, and Missionary Baptists. The records of the church were found in very deteriorated conditions in the library in Knoxville. In 1810, Miller’s Cove Baptist Church was formed from the division of Tuckaleechee Baptist Church between Miller’s Cove and Wear Cove. The church remains one of the oldest congregations in Blount County. [1]

In October 1567, the Juan Pardo expedition is believed to have crossed Little River at what is now Walland. The expedition arrived from the east via Reed Creek and headed west along Hesse Creek, traversing part of Chilhowee Mountain and Happy Valley in route to the village of “Chalahume” on the Little Tennessee River. [2]

By the time permanent Euro-American settlers arrived in the area in the 1780s, Miller’s Cove was part of a vast Cherokee hunting ground. Along with fertile land typical of any limestone cove, the various Cherokee trails in the vicinity drew the first settlers to Miller’s Cove in the late 18th century. The Great Indian Warpath passed through Maryville to the north, and the Tuckaleechee and Southeastern Trail forked in Tuckaleechee Cove to the south. The Overhill Cherokee villages of Chilhowee and Tallassee lay the other end of Chilhowee Mountain. [2]

The first Euro-American settlers arrived in Blount County around 1785, during a period of heightened tensions with the Cherokee. The county’s early pioneers erected a series of small forts to protect themselves against sporadic Cherokee attacks, most of which were located in the vicinity of the Warpath. Miller’s Cove is probably named after Alexander Miller and his brother, Andrew Miller, who built cabins in the cove sometime around 1800. A few years before the Millers arrived, Swiss immigrant John Hess built a grist mill in the west end of the cove. He was followed by the Martin family, whose mill was situated in the cove’s eastern section. Other early settlers in Miller’s Cove included Alexander Reed and John Waters, both of whom arrived before 1810. [2]

John and Lucretia Oliver introduced the Baptist denomination to Cades Cove in 1825 when they organized a branch of the Miller’s Cove Baptist Church there.  The Cades Cove Baptist Church was pronounced an independent entity in 1829.  Church unity would be short-lived, however, as the 1830s saw a division among Baptist churches throughout East Tennessee because of what was known as the Anti-Division Split. [2]

The Cades Cove Missionary Baptist Church began meeting in individual homes, although it would occasionally meet at the Primitive Baptist or Methodist church buildings.  The church did hold services at all during the Civil War.  Following a particularly successful revival after the war, however, the church was able to erect its own building on Hyatt Hill in 1894.  Over the years, the church roll would grow from 40 to over 100 members, prompting the construction of a new building in 1915.  This building is the one visitor to Cades Cove can still see today. [2]

Millers Cove Baptist Church is located in a peaceful country setting. The building made of large tan bricks standing in the middle of a valley nestled in the foothills of the Smokies.  I spent time in prayer and meditation. I prayed for a new rival to emerge from this global pandemic. That people hearts would be renewed, and led back to worship once churches reopen to the public.

As many churches are starting to go back to live services, from the COVID 19 lockdown, we give thanks that our Founding Fathers shaped our nation with freedom of religion. Without them, there would have been no United States of America. Many of them came from British North American Colonies that joined in 1776 to form the United States of America were settled in the 17th century for religious purposes by men and women who, in the face of European persecution, refused to compromise passionately held religious convictions.

The United States Constitution under the First Amendment was adopted on December 15, 1791. It established a separation of church and state that prohibited the federal government from making any law “respecting an establishment of religion.” It also prohibits the government, in most cases, from interfering with a person’s religious beliefs or practices. Under Article One states Congress shall make no law respecting an establishment of religion, or prohibiting the free exercise thereof; or abridging the freedom of speech, or of the press; or the right of the people peaceably to assemble, and to petition the Government for a redress of grievances. Please pray for our churches that they may have safe and productive openings over the next several weeks.

With the National emergency for the COVID-19 virus many churches are remaining closed to the public.  I spent time outside the church in meditation and prayer.