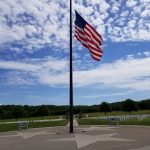 I made the trip to see the thousands of gravestones at the East Tennessee Veterans Cemetery. In preparation for the upcoming Memorial Day on May 25th, I wanted to take some time to pay tribute to those who served and died for our country. It’s the final resting place of several thousand men and women, who in a wide variety of circumstances, signed up to serve their country in uniform. Some of them died as aged veterans; many others were young soldiers who died in combat.

Memorial Day, which is an American holiday, observed on the last Monday of May, honoring the men and women who died while serving in the U.S. military. Originally known as Decoration Day, it originated in the years following the Civil War and became an official federal holiday in 1971. Many Americans observe Memorial Day by visiting cemeteries or memorials, holding family gatherings and participating in parades. Unofficially, it marks the beginning of the summer season. [1]

It was a warm sunny day as I entered the gates to the veteran’s cemetery.  The view of the white marble stones almost glow amid the bright green grass, as the United States flag flies high above it all from a tall pole in the center of the cemetery. After strolling through the perfectly kept grounds I stopped at the Veterans Chapel and spent time in prayer, and then reflected back on the letters I have read from my Great Uncle Sam Howard who served in World War II.

Sadly, most of the World War II veterans are now gone or in their 90’s.  I am dedicating this journey to my Great Uncle Sam “Sunny” Howard who fought and died in World War II. He honorably fought to preserve our freedoms. I am in possession of copies of the letters he wrote from Jan 1943 through 1944 during his time serving our country in the Marine Corps.

Reflecting back on history on September 16, 1940 the draft started for WWII where men between 18 and 60 had to register for the draft and men between 18 and 45 were actually drafted. Sam enlisted at the recruiting office in Philadelphia on May 13 1941, and underwent recruit training at the Marine Barracks, Parris Island S.C.  He was 27 when he joined, because he was older than many of the other recruits some called him Pops as he looked out for them like a father.  He was sent overseas July 18, 1943 and engaged in action on many Pacific Islands including the Marshall Islands.

(August 1, 1943) I’m OK, and feeling fine except that I may have lost a few pounds due to the heat and trying to climb coconut trees. I’ve been very busy and barely time to write.  The jungles are pretty hot and sticky, but so far, I don’t mind them. The lizards are big and the mosquitos are small, but oh they can bite. Right now, there is a cool breeze blowing in from the ocean, and the breakers are only about 50 feet from our hut.

(February 26, 1944) We have been in two landings, and both were quite successful. We were on the Eniwetok Atoll in the Marshall Islands. I had some mighty close shaves along with the rest. We call ourselves lucky. Early in the fighting I had a sort of a private duel with a Japanese officer that lasted about twenty minutes. “you know one ducks behind a coconut tree then shoots.” After about the third time I placed a good shot and the duel was over. I also had shorter duals, in which I was wounded very slightly that required 8 stitches to close the wound. Don’t worry I will be back in the best of shape in a few weeks.

(March 4, 1944) This pencil I am using is so short it makes my hand sticky hanging on to it. This jungle is sticky too. The moon is beautiful on the lagoon side of our island. I don’t even need a candle to write.

(March 25, 1944 Central Pacific) I suppose you wonder how I am. It’s like this, I’m well and content. What more could a guy ask for? Ok, the sun is a little hot, the lizards pesky and the nights are long.

(April 17, 1944 Southwest Pacific) I wasn’t in the hospital as you thought. I could have gone, but I convinced the doctor to sew me up where I was. That way I was able to stay with the same outfit. I hear that the 22nd Marines have made the news. We all think it’s a good outfit, and the stories back home make us feel mighty good.  How did you get my picture and article in the local paper? (01 April 1944 Williamsport Sun-Gazette Page 10) I don’t like that so good, cause many fellows did much better, but I did have my hands full for a while.

(April 30, 1944 Southwest Pacific) Sunday again and not too much to do, but it’s still early in the morning so anything can happen. I think these jungles are gonna be stemming hot today the way it feels right now. The big beautiful colored parrots are fighting, and making all kinds of loud noises in the top of the coconut trees.

(August 8, 1944 Central Pacific) Here I am on Guam. I had a difficult time in a big way. Our outfit was the first to land, and from then it was rough. I was in the front lines 6 days and 6 nights. They were the longest I have ever spent. During the days we pushed the enemy, during the nights they would try to sneak through the lines. Many of the Marines, and Japanese had it out with knifes in fox holes at night. It happened very close to me several times. Just waiting in a fox hole, half full of water, waiting on the enemy to crawl in your fox hole takes the starch out you. A few times I almost got shot by my own buddies, while throwing hand grenades at the enemy in the bushes in front of me. Here on Guam I was in on the taking of the airfield Roti Point. We had to fight pretty hard all the way.

We rested for a couple of days, before our company went into the mountains on a 6-day patrol. We passed through many native villages, and almost every night they would roast us cows, pigs and chickens with making of rice and bread fruit.  The natives were tickled to death to see us, even sometimes at night they would stand guard with us.

(October 8, 1944) It’s a nice Sunday morning, so I’ll take a good swim after I finish writing this. I suppose the frost has changed the color of all the leaves back home, and Pop and Harold will soon be getting their hunting license. I been firing in the rifle on the range during the past two weeks.  I would like to go hunting deer with Pops, and all the gang again, but there is still plenty to be done out here yet, so I will just have to wait. Well I was thirty-one last week and still keeping up with the young fellows, so far age hasn’t hurt me. Tomorrow (Monday) I get the day off and a big steak dinner with cake and all the trimmings, all this because of my birthday. Pretty nice of them to do that.

(Monday Christmas Day December 25, 1944) After breakfast a gang of us strolled down to the beach, which is only fifty yards away. A big school of porpoise fish were jumping in and out of the water, seemed like they knew it was a holiday, and was trying to put on a show for us. Anyhow we talked for a while, then gradually the talking stopped, and the fellows got those thousand-mile stares in their eyes and all knew we were thinking of home.  Our Chaplin had a special Christmas service last night. I can say it was a very thoughtful bunch of guys. I prayed for everyone back at home, and that if I could I’d sure like to spend the next Christmas at home. And I did not forget my buddies that fell they are heroes.  That’s the one thing that hurts us so much, our lost pals.

In a book titled “In Memory of a Fellow Marine” By Members of the Sixth Marine Division. Page 95 in the battle of the ASA KAWA the Marines destroy Japanese emplacement with demolitions during the assault on Charlie Hill. Lloyd with a squad led by Sergeant Joe Passanante rushed one of the tombs and in five minutes half the squad was down. The rest took shelter as a platoon sergeant Sam Howard, shouted to Lloyd, Any wounded up there? There were, replied Lloyd, but it was almost certain death to try to rescue them. “I’m going said Howard, and ran forward: he had almost reached the wounded Marines when machine-gun bullets brought him down. Later, the whole Company C was withdrawn 400 hundred yards and tanks came forward to take out the tombs. The operation lasted for an hour or more. The company then moved in and successfully reached the top of the hill. There were less than two-thirds of them left now.  Sadly, Sunny died in combat on May 11, 1945 preceded by two days the termination of his 4 years of service in the US Marines.  He was laid to rest in the National Cemetery of the Pacific in Honolulu Hawaii.

Sam Howard fought bravely and died on the island of Okinawa during World War II. Later the outpouring of love, honor and respect was reported by fellow marines that served with him. They reported: He was the finest gentleman and best Marine. Sam was inspirational person for all marines in the company. He not only looked the part he was a leader of men. During his final assault he led the attack, which wasn’t his job at the time. He just saw young Marines attacking a heavily defended position and he took the lead without any hesitation.

Memorial Day is not just about hot dog cookouts, sales and vacations. It’s about the sacrifice made by men and women serving in the Armed Forces.  We can find the cost of our freedoms buried in the ground.  War is a terrible occurrence, but is necessary because of aggressions by evildoers.  Conflicts and war have impacted the Earth for thousands of years. The story of my Great Uncle Sam Howard is just one story of thousands that can be told about the sacrifices made by military heroes, protecting our freedoms.

When Soldiers go to battle, the chaplain follows meeting the spiritual needs of soldiers. Despite witnessing horrific battlefield atrocities, many soldiers find comfort in their religious faith.  We can take solemn that in difficult times God is with us (Isaiah 43:1). We have the promise that for believers we will go to heaven (John 14:2, John 14:6). If we put our faith in Christ and His death on the cross to take care of our sins, then He will save us and give us an eternal relationship with Him.

With the National emergency for the COVID-19 virus many churches are remaining closed to the public.  I spent time outside the cemetery chapel in meditation and prayer.

May our Lord continue to bless our country and our military personal in Jesus name.

“I have told you these things, so that in me you may have peace. In this world you will have trouble. But take heart! I have overcome the world.”- (John 16:33) NIV