I had the privilege to visit Meridian Baptist Church. The church has a deep history going back to 1874. On April 12, 1874 Meridian Baptist Church was constituted. There were 27 members in the group constituting the charter members of the church [2]. On 12 April 1901 as the church celebrated their 27th anniversary with a celebration with entertainment and a basket lunch. It was reported that the church had one of the strongest congregations of any country church in the area. [5]

In 1953 a new red brick church was opened on Chapman Highway. It was formerly located on the Old Sevierville Pike; the church has occupied at least 3 building since organization in 1874. During the new building celebration in 1953 a special service was conducted with visiting ministers and singers. [3] In 1966 an addition was added to the original building providing more space for church functions.

This is a little off topic but, for Civil war enthusiasts you may find this interesting. Sultana Disaster Survivors held an annual reunion April 27, 1923 at the Meridian Baptist Church. The service opened with a song by the choir and devotional service from Rev. A.C. Acuff Pastor of the church during this time. During this reunion only a small group of survivors remained. Sultana, which was destroyed April 27, 1865 by fire followed by an explosion. The disaster at that time was listed as the world’s greatest marine tragedy resulting in the loss of 1,700 lives. The Sultana was laden with Union army soldiers, some 2,000 Federal soldiers released from southern prisons at the end of the civil war. A large number of soldiers from Knox, Blount, and adjoining counties of East Tennessee were on the steamer and many perished in the disaster. A few Knoxville and East Tennessee veterans who escaped death owed their lives to their success in swimming [4].

During my visit I had the privilege of meeting Pastor Dana L. Fachman, as well as several individuals of the church in attendance during the Wednesday evening prayer meeting.  I had a wonderful time in fellowship and plan to visit with them again in future.

To date all the churches, I have visited was during office hours. Showing up without an appointment can be a challenge if your goal is to visit with the pastor. Pastors have a very busy schedule during the week, so it is recommended to make an appointment. 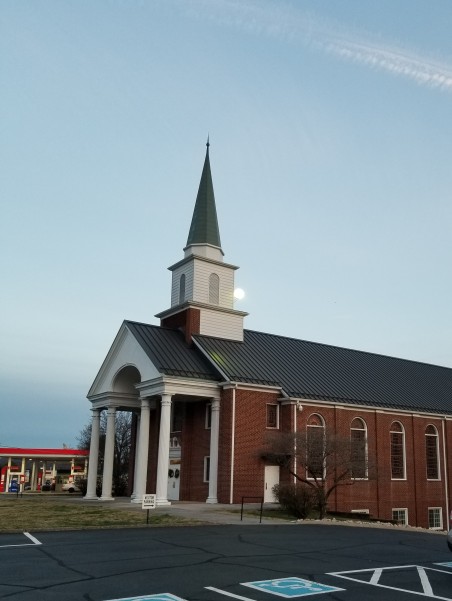 The present church was built in 1953 it is designed in a beautiful colonial architecture. The exterior is made of red brick with a modern steel roof. The church side walls have large rounded arched stained-glass windows going down the side of the building. The windows allow light to flow into the sanctuary. The front of the building is accented with large pillars leading up to the entryway. Two large white wooden doors provide a warm entrance into the large open sanctuary. 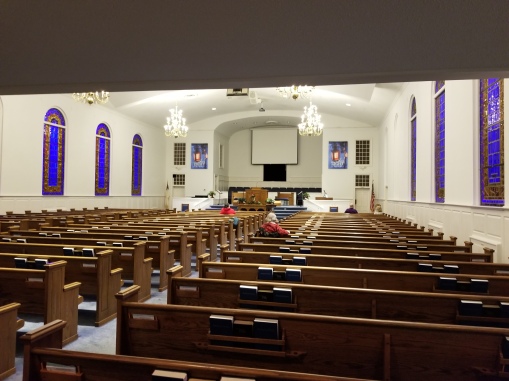 Inside the sanctuary the walls are beige color with white paneling, and natural oak trim. The sanctuary features bright colored stained-glass windows that captures your attention as you enter the church. The sanctuary has high ceilings allowing room for balcony seating. The ceiling supports multiple hanging chandeliers that radiantly illuminates the large area. The pews are made of grained wood, and are divided into three sections in the lower level.  It was reported at the time the church was built that the sanctuary has a seating capacity of around 600.

The steps leading up to the raised pulpit where the sermons are preached.   (Pulpit the Latin pulpitum – Platform or staging) 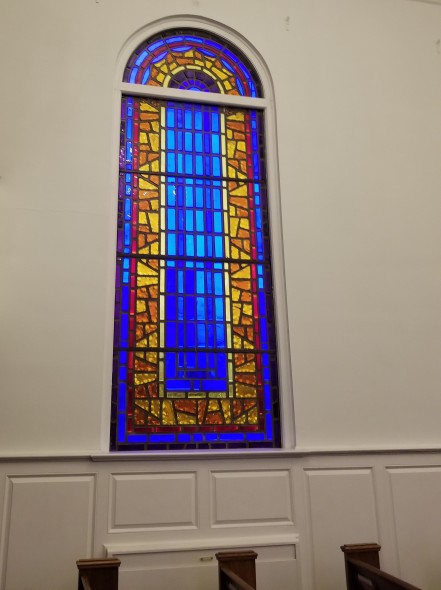 This is close up view of one of the many bright colored stained-glass window that captures your attention as you enter the sanctuary. 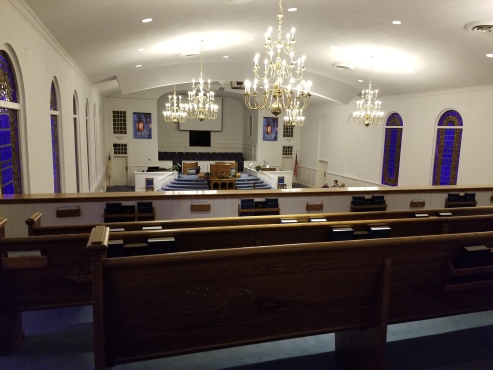 This is a view from the balcony. The chandeliers are adorned with multiple lights.

I had the opportunity to attend Wednesday evening prayer meeting at the Median Baptist Church. I arrived as an unannounced visitor coming in off the street. I was warmly greeted by many that were attending the meeting. In the short conversations I had before the start of the meeting; many shared their pride in the church, and conveyed the fine leadership that is shepherding them.

The prayer service was led by Pastor Dana Fachman and opened with a song led by Dennis Johnson Associate Pastor of Worship & Ministry.  I was humbled by the prayer list, which consisted of large list of names provided on a light blue 8×11 sheet of paper. This list is meticulously updated each week, reflecting the latest status of new prayer requests combined with individual in need of continued prayers from the previous weeks. The list  included those with planned medical procedures; currently in the hospitals; in nursing homes; assisted living; missionaries;  as well as those serving in our armed forces. This large list was a perfect example of the tremendous need each church has for prayers.  We finished the time in the first and second book of the prophet Samuel. The focused was on David secretly being anointed by Samuel as a young boy who was to be the future king of the nation. He had to wait several years from the time he was first anointed by Samuel to the time he became King over Judah.  Providing an example how important it is to be patience and wait on the Lord.

In closing at the end of the meeting I spent a few minutes praying for the church.  God hears all our prayers; you don’t need to be in a church to pray. You can do it in the privacy of your home. I encourage you to pray for all the churches in your community. In prayer lift up the leadership, and its congregation as well as those that need to be reached in the community.

“Trust in the LORD with all your heart and lean not on your own understanding, in all your ways submit to him, and he will make your paths straight.” – (Proverbs 3:5-6) NIV

Thank you for following my journey; May this find you well and happy, God Bless