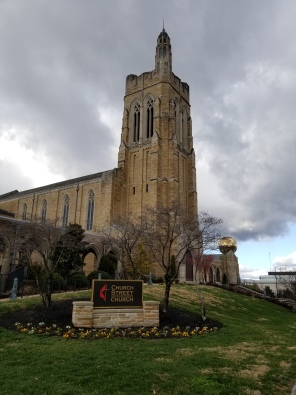 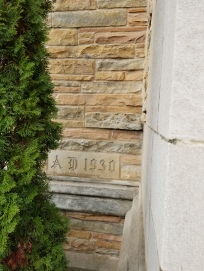 On Labor Day 1940, with his campaign for a third term beginning, President Franklin D. Roosevelt was driven past the church in route to Newfound Gap to dedicate the Great Smoky Mountains National Park. He reportedly inquired about the church and remarked, “That is the most beautiful church I have ever seen.” [3].  In 2009, the church building was listed on the National Register of Historic Places [3]. The National Register listing recognizes the building for its architecture and its stained glass.

Date Visited: 2020 January 7th.  Church Street United Methodist Church located at 900 Henley Street in Knoxville, Tennessee. This building retains the Gothic Revival architectural style from previous buildings they occupied in the past. The church is built from Crab Orchard sandstone and has a slate roof. A prominent feature of the building is a large entrance tower.  The original sanctuary and church school located around a central courtyard, which is accessed through a series of arch entrance ways.

The central body of the church area is divided into several seating areas, which includes a balcony section that overlooks the altar. The pews are grained in wood with padded cushions.

The ceilings are over two stories high covered with wood that supports hanging pendant lights. The main ceiling resembles the wooden beams of an inverted ship.

Below is a picture of the seating section off to the left side of the sanctuary. (Maybe a side Altar or chapel. Sorry if incorrect I do not attend this church) It has a stunning cross on the wall against a blue background. 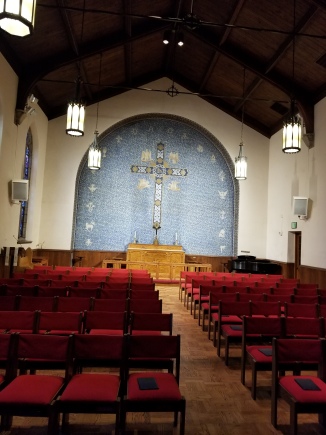 The picture below: The sanctuary features stained glass windows that are beautifully stained in multiple shades of blue, green, red and gold. They were designed and manufactured by Charles J. Connick of Boston [2].

During my visit I had the privilege of meeting some of the office staff, and was graciously shown the church sanctuary by Kevin who was in the process of packing up the last of the Christmas decorations.

The First Knoxville Methodist church was constructed in 1816, and the current church at the Henley location was built in 1930. In the year 1800 Francis Asbury rode into Knoxville on November 1 and preached to 700 people on November 2. The city was only 9 years old and was the state capital at the time. It was caught in the wave of Christian “Second Re-Awakening” which was sweeping the country. Ashbury’s devoted his life to ministry, traveling on horseback and by carriage thousands of miles to those living on the frontier [1].

The Second Great Awakening was a Protestant religious revival during the early 19th century in the United States. The movement began around 1790, gained momentum by 1800 and, after 1820, membership rose rapidly among Baptist and Methodist congregations whose preachers led the movement.  The movement quickly spread throughout Kentucky, Indiana, Tennessee, and southern Ohio, as well as other regions of the United States and Canada. Each denomination had assets that allowed it to thrive on the frontier. The Methodists had an efficient organization that depended on itinerant ministers, known as “circuit riders”, who sought out people in remote frontier locations. The circuit riders came from among the common people, which helped them establish rapport with the frontier families they hoped to convert [4].

Initially, Church Street Methodist Church met in a house on Hill Avenue in downtown Knoxville. In 1836 the congregation moved into a new building on Church Street between Walnut and Market Streets, where it met until 1863 when the building was confiscated by Union troops for use as a hospital during the American Civil War. Around 1870, the congregation relocated to a brick building one block east of its former location on Church Street, and in 1879 it moved into a Victorian Gothic church building erected on its former 410 Church Street location. This church was commenced by Northern Methodist church in July, 1867, partly of funds raised by subscriptions in Knoxville and at the Northern. They also received money paid by the United States for damages done by the Federal army to the old Southern Methodist church during the civil war [5].

In February 1928, when a fire destroyed the building on Church Street. The congregation then acquired the Henley Street site to construct a new, larger church building. In the move to Henley Street, the church retained its old name of Church Street Methodist Episcopal Church, South.  (In 1939, it became Church Street Methodist Church) [2]. In 2009, the church building was listed on the National Register of Historic Places.[3] The National Register listing recognizes the building for its architecture and its stained glass.

Church Street United Methodist Church has occupied several buildings over the years at different locations. This serves as a reminded that buildings can change, but it’s the people that make up the church through the body of Christ.  As I spent time meditating and praying. I felt a strong spiritual connection with this church.  A church with a deep history, which held its first worship services at the current location in January 1931. I ponder about all the sermons that led people to ask Jesus into their lives as their savior.  All the happiness and joy of weddings. The tears and sadness of funerals. The many stories that could be told, and the many still waiting to be told. I am grateful to the many people over the years that have faithfully tithed to build this church. I am grateful many people continue to dedicated their self to support the church missions.

May our Lord continue to bless this church in Jesus’ name. Amen

Please Pray for all churches as they continue to face challenges in the year 2020.